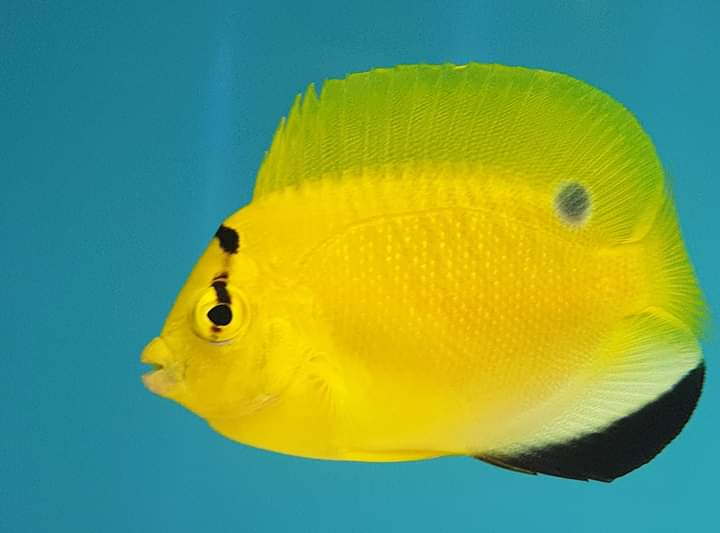 We maintain the only and the most modern mariculture facility in Africa that produces high quality soft corals.

Fourteen years of operation in the industry has credited us with a large network of suppliers across the East African coast and to the extended African continent.

On all the marine fish exported from Africa we have a 65% of its share and an estimated 4-5% of the worldwide share of the industry.

To remain top class in the industry, we have partnered with highly valued wholesalers,importers and suppliers of ornamental marine livestock.

The off-shore mariculture facility is one of our major projects and along with the cost implications and extensive level technology and technical know-how, the company has independently managed to develop and operate its facilities and projects without any financial sponsorship.

This is an assurance that you are trading with a strong and well established partner with enough capacity and muscles to supply all your orders effectively and efficiently. We have quality and we shall remain dedicated unto our motto: “Quality is our commitment.”

Welcome to trade with us, for more queries and how to place order contact us through: support@kenyamarinecenter.com 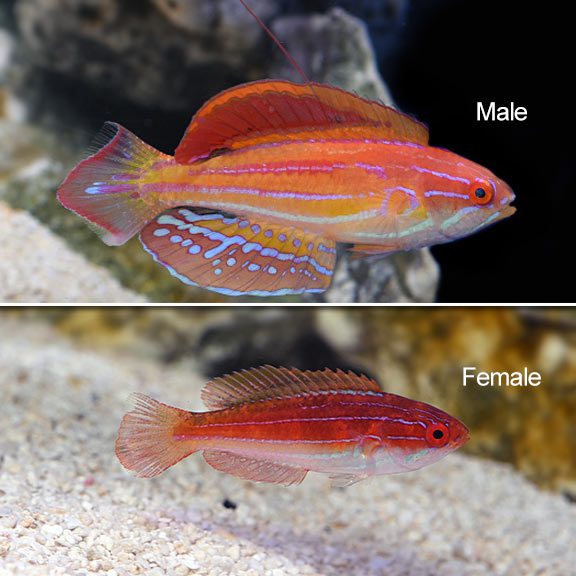 Diamond Tail Flasher Wrasse (Paracheilinus attenuatus), among the best ornamental fish for home aquariums due to attractiveness and being reef-safe.

The Diamond Tail Flasher Wrasse requires an established 55 gallon (or larger) aquarium with a tight-fitting lid since it is a jumper. In the wild, the Diamond Tail Flasher Wrasse are often found along reef slopes and rubble zones where they swim near the bottom and forming small groups in which the male swims back and forth between groups of females. The colors of an adult male intensifies during courtship and he may flare or “flash” his fins to attract females. We recommend only one male per aquarium display.

The diet of the Diamond Tail Flasher Wrasse should include vitamin enriched frozen mysis shrimp, brine shrimp, and other meaty foods along with a high quality marine flake and marine pellet food. 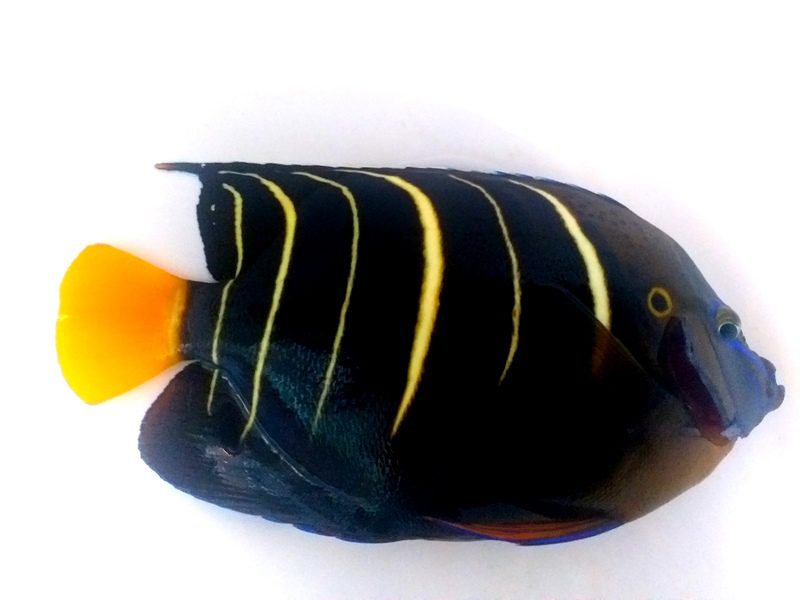 It is possible to keep various different sizes of Angelfish in the same aquarium, but it means that one must choose species with care and that the conditions in the tank are optimum.

Here are some suggestions to increase the chances of success:

Choice of species
It is important not to choose species that are too similar, the greater the variance, the larger the chance of success. It is also advantageous to choose fish of different sizes. Two young Angelfish of the same same size and pattern for example are a bad idea. One should of course avoid the most aggressive species.

Order of introduction
It is a good idea to make a wishlist and choosing the order so, that the least aggressive are introduced first. When adding similar sized Ange fish it works best if they are introduced simultaneously.

Space
There should be enough space in the aquarium, but it is difficult to give specific advice. Of course there are exceptions to the table below as to just how big a tank should be in order to stand a good chance of success. Space itself is not enough, there should also be sufficient hiding places so the fish do not have to fight over these.

Food and water quality
It is always helpful to give the fish a varied diet, so they can withstand the occasional stress situation when for example new fish are introduced. Water quality must also be very high, so that the fish do not get stressed for that reason either.

Corals suitable for an aquarium with Angelfish

It can be a challenge to keep corals together with Angelfish, since the latter eat most soft corals and LPS. Especially Zoathus are swiftly eaten by the larger species.

It is however possible to build up a mixed coral aquarium with Angelfish. If some of the following corals are choosen there is a good chance the Angelfish will leave them alone; Hammer corals, Bubble corals, Star polyps, Disc anemones and others.
Most of the SPS corals can be kept with Angelfish.

You can order for the angelfish or check our stock list from: 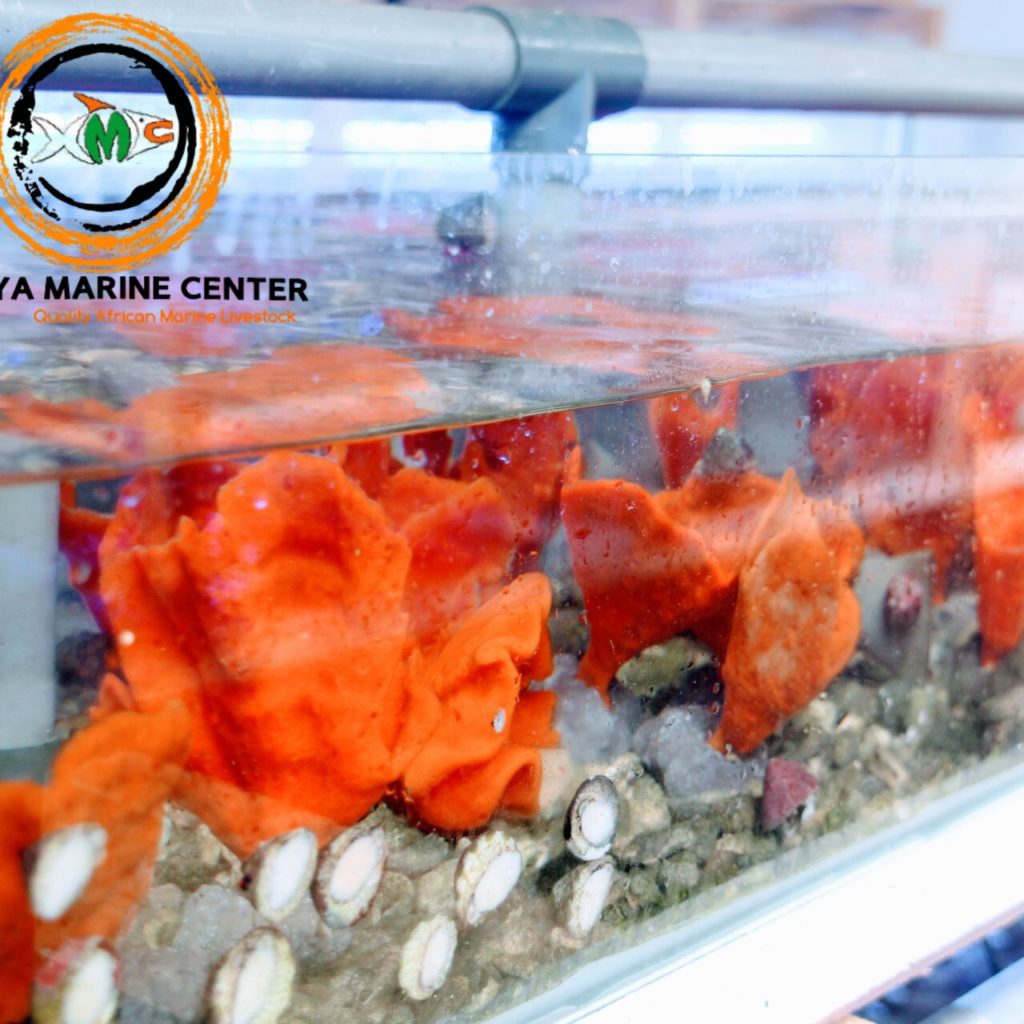 Soft coral aquaculture is an activity of growing interest due to the degradation of coral reefs worldwide and concomitant growing demand for corals by three industries: marine ornamental trade, pharmaceutical industry and reef restoration.

If you need to know more about our soft corals kindly get in touch with us through our emails:

Why should you know your trade partner?

You need to be certain that your trade partner will deliver quality workmanship and products, on-time, on-budget. Anything less and your bottom-line and your reputation are at risk. Your trade partner should take quality control as seriously as you do. Time is money so delivering certainty to your schedule means more than just showing up, but also showing up and doing it right.
Does the trade partner have a documented quality control and assurance program? And when the inevitable problem happens, do they have a process for catching problems, resolving the issue and then learning from the problem to prevent it from reoccurring? Can they share their process with you?

Below is our catalog, this is to enable our partners who who we are.

For more queries feel free to as us : support@kenyamarinecenter.com 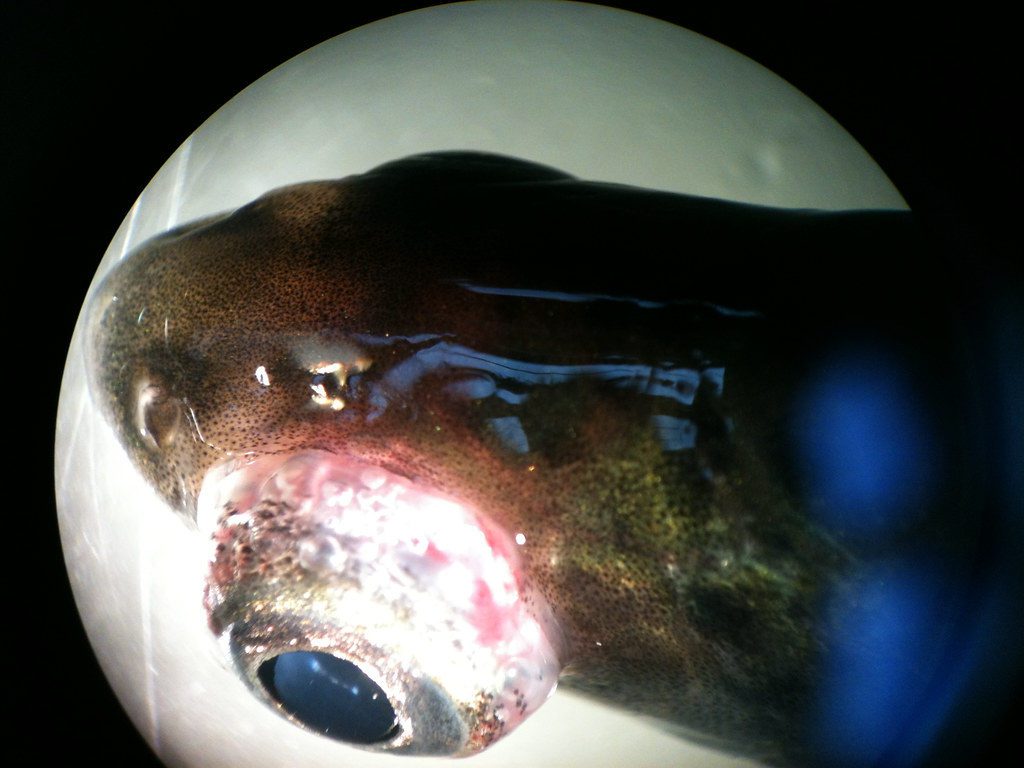 The causative factors of fish diseases can be grouped under six broad categories:

1. Internal to the individual – genetic diseases

6. A combination of a few or all factors indicated above.

General methods to detect the health of fish in field conditions: 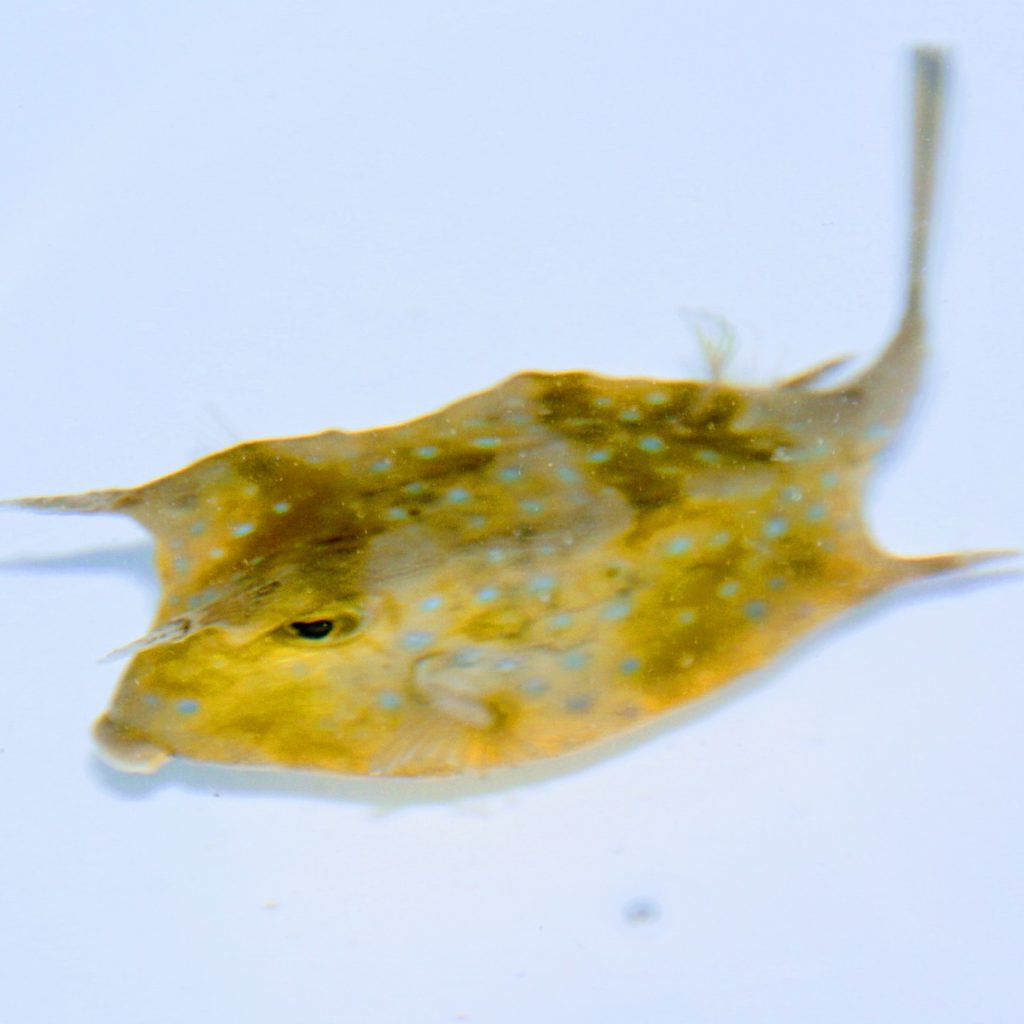 This unusual reef fish has an armor of heavy hexagonal scales covering much of its body, and an elongated caudal peduncle (tail stem) with rounded fins. It has a small, puckered mouth and tiny ‘horns’ over its eyes, with a sloped face and pronounced forehead, giving it its bovine name.
Order – Tetraodontiformes
Family – Ostraciidae
Genus – Acanthostracion
Species – polygonius

Distinctive Features:
The triangular body is nearly enclosed in a “carapace” consisting of thickened hexagonal scale plates that are firmly attached to each other with the exception of the cheeks to allow for respiration movements. There are openings in the carapace for the mouth, eyes, gills, fins, and the flexible caudal peduncle.
There is one pair of scales in front of the eyes. The terminal mouth is small with fleshy lips and the gill openings are short with slits located in front of the bases of the pectoral fins. There are no pelvic fins and the caudal fin is distinctly rounded.

Dentition:
The teeth of the cowfish are moderate and conical in shape with usually less than 15 teeth in each jaw.

Reproduction:
Very little is known about reproduction within the family Ostraciidae. However, it has been observed that this species forms social harems consisting of one male along with only two females.

Predators:
Larger fish are potential predators of the cowfish, however it may be undesirable as a prey item due to its protective external armor, the carapace.

You can get the cowfish and many more marine fish at Kenya Marine Center. 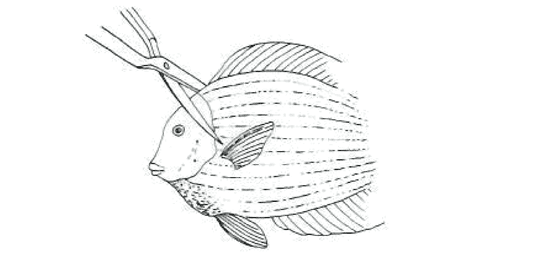 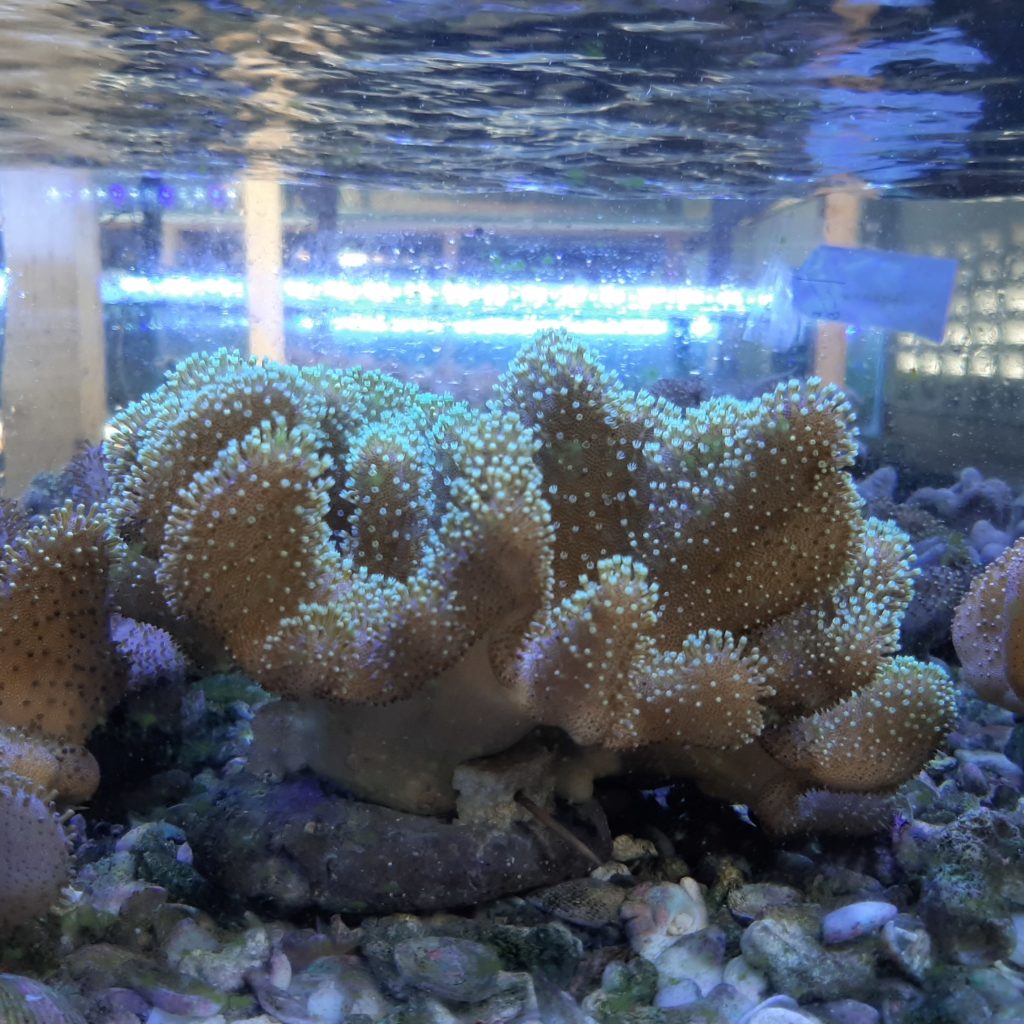 The coral reefs of the Indian waters are known for its rich diversity of soft corals. The soft corals are a rich source of biologically active compounds as most of them are found to possess anti-bacterial, anti-inflammatory, anti-tumour and cytotoxic properties.

The dynamic appearance and colouration have also made them important additions in the marine aquarium, particularly in the reef tanks which is gaining lot of popularity the world over. However, most of the soft corals used in the marine aquarium trade are collected from the wild, which in the long run will not be sustainable. The propagation and culture of soft corals in captivity is the only solutionto meet the demand of the hobbyists. The propagation in captive conditions also helps in restoration of degraded reefs.

Despite how promising propagation may seem for sustainable practice, its cost implications and other underlying factors must be considered. Our aquariums are located two kilometers away from the the Indian ocean this is influenced by the robust tourism activities taking place at the coastal beaches of Kenya. In order to maintain almost the exact conditions as required by the species and to obtain the expected results, intensive and integrated techniques have to be implemented.

Currently we are culturing a lot of soft coral species and with the eminent improvement we might increase the size of our aquariums soon. Dermands are high for the soft corals and we are still dedicated to meet them.

Cleaner shrimps exhibit a cleaning symbiosis with the fish in the aquarium where the shrimp clean parasites from the fish. The fish benefit by having parasites removed from them, and the shrimp gain the nutritional value of the parasites. The shrimp also eat the mucus and parasites around the wounds of injured fish, which reduces infections and helps healing. The action of cleansing further aids the health of client fish by reducing their stress levels. In many coral reef, cleaner shrimp congregate at cleaning stations.

Get the cleaner shrimps and many more marine fish : support@kenyamarinecenter.com